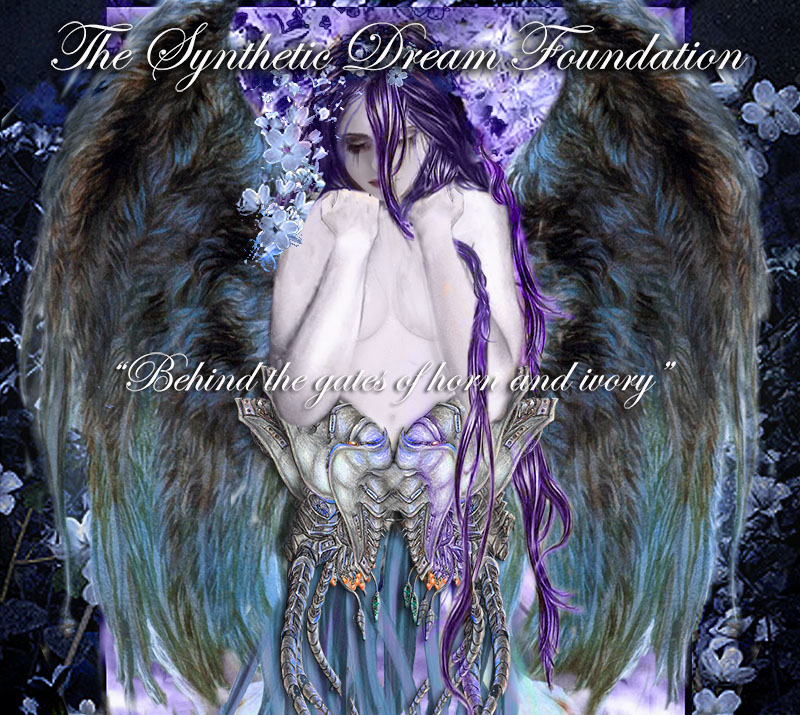 "Behind the Gates of Horn and Ivory"

This was the cover art, for album of the same name.

The gates of horn and ivory is an artistic idea most often portrayed in literature, used to distinguish objective dreams (corresponding to factual occurrences) from false ones. The term was first used in the ancient Greek language, from which the word for "horn" is incredibly similar to that for "fulfil" and also the word for "ivory" is similar to that for "deceive". Based on the premise of that play on words, true dreams are portrayed as of having come through the gates of horn, whereas false dreams are told to have come through those of ivory.

The idea of the gates makes its earliest appearance the great and fantastical epic of The Odyssey (which was my first introduction to the imagery).  It first appears in book 19, lines 560-569. During this passage, Penelope, has had a dream which predicts the retrun of her husband.  She continues to express that she thinks the dream may be false by contemplating:

"Stranger, dreams verily are baffling and unclear of meaning, and in no wise do they find fulfilment in all things for men. For two are the gates of shadowy dreams, and one is fashioned of horn and one of ivory. Those dreams that pass through the gate of sawn ivory deceive men, bringing words that find no fulfilment. But those that come forth through the gate of polished horn bring true issues to pass, when any mortal sees them. But in my case it was not from thence, methinks, that my strange dream came."

A second mention, historically speaking, is made by Plato when he refers to the two gates in his dialogue Charmides:

Socrates: "Listen then," I said, "to my dream, to see whether it comes through horn or through ivory."

A reference to the Odyssean image also appears in the late (c. AD 400) epic poet Nonnus:

As Morrheus slept, the vision of a dream cajoled him,
beguiling his mind after flitting through the gates of ivory.

Virgil also continued to flush out the details of this device during passages of The Aeneid, describing a gate of horn as the passageway for true shadows and one of ivory as that through which the Manes in the underworld send false dreams up to the living. It is through the second gate Virgil makes his hero Aeneas, return from his harrowing visit to the underworld, where he has met, his deceased father Anchises:

His valiant offspring and divining guest.

In his Silvae V iii 285-290, a lament for his dead father, the poet Publius Papinius Statius, expresses the wish that his father may come to him from the abode of the dead in the form of a true dream, passing therefore through the gate of horn:

Thence mayst thou pass to where the better gate of horn o'ercomes the envious ivory, and in the semblance of a dream teach me what thou wert wont to teach.

The 15th century Latin poet Basinio of Parma, employed at the court of Sigismondo Malatesta in Rimini, wrote a panegyric epic poem for his prince (Hesperis) modelled largely on the Aeneid and the Homeric epics, in which Sigismondo, as epic hero, undertakes a journey to the underworld in order to meet his deceased father Pandolfo Malatesta. Before that he passes the temple of Fama which has a bipartite gate, one half made of horn, one of ivory. On the ivory half not only Sigismondo's descent but also the ones by Hercules, Theseus, Ulysses and Aeneas are depicted.

"Having seen that, they turn towards the astounding temple of Fame, a temple enormous and imposing in size and shape, whose door on its left side is white from ivory steps with shining horn on the other half. Disturbing nightmares are conveyed by false rumour on the vain gates of ivory, while true dreams of horn are sent by trustworthy rumours. The gate of horn shows the Spaniards defeated on the Tyrrhenian shore [i.e. Sigismondo's victory over Alfonso's V. troops at Piombino in 1448]. On the ivory steps Sigismondo turns toward the sea, and is swimming after his ship is destroyed [on his way to the island where he is to undertake his trip to the underworld]. There Theseus and also Hercules made their way: there brave and victorious Ulysses went to the gloomy homes of the Cimmerians; there faithful Aeneas took to the Stygian lake Avernus."
Basinio's Latin text is as follows:

The gates of horn and ivory appear in the following notable English written works:

Edmund Spenser's epic poem "The Faery Queene" (1590, English) in book 1, stanzas XL and XLIV, in reference to a false dream being brought to the hero (Prince Arthur/the Knight of the Red Crosse).
Alexander Pope's mock-epic The Dunciad (1743), in Book III: "And thro' the Iv'ry Gate the Vision flies."
E. R. Eddison's romance The Worm Ouroboros (1922), in Chapter 2: "...belike the dream was a true dream, sent thee through the gate of horn".[15]
E. M. Forster's short story The Other Side of the Hedge. The reference from Forster comes when the main character of the story observes the two gates; The Other Side of the Hedge is usually read as a metaphor of death and Heaven.
T.S. Eliot's poem "Sweeney Among the Nightingales," the line "And Sweeney guards the horned gate" is likewise a reference to this image.[16]
Eliot's poem Ash-Wednesday. The lines "And the blind eye creates / The empty forms between the ivory gates" similarly refer to this concept.
William Empson's poem 'Letter III': '...offspring of Heaven first born, | Earth's terra firma, the Hell-Gate of Horn'
H. P. Lovecraft's story, "The Doom that Came to Sarnath," as a set of magnificent ivory gates, carved from one piece of ivory stood at the entrance of a city of vain humans, which seems to be taken from Lord Dunsany's story "The Idle Days on the Yann". It is also mentioned as a passage to the realm of hallucinations in Lovecraft's "Celephaïs."
Ursula K. Le Guin's novel A Wizard of Earthsea
Neil Gaiman's graphic novel series The Sandman. The gates themselves were crafted from the horns and bones of gods that attempted to take over the Dreaming, the domain of Dream of the Endless. With the help of a woman made of light named Alianora, Dream defeated the gods and used their remains to create the gates and his battle-helm.
Robert Holdstock's novel Gate of Ivory, Gate of Horn. In the Holdstock novel, the main character grapples with a traumatic event that has two very different manifestations, one true and one false.
Derek Mahon's poem "Homage to Malcolm Lowry". "Lighting-blind, you, tempest-torn / At the poles of our condition, did not confuse / The Gates of Ivory with the Gates of Horn."[17]
Margaret Drabble's novel The Gates of Ivory
W.H. Auden's poem "Horae Canonicae"
Seamus Heaney's poem "To a Dutch Potter in Ireland" in The Spirit Level (poetry): "Then I entered a strongroom of vocabulary / Where words like urns that had come through the fire / Stood in their bone-dry alcoves next a kiln // And came away changed, like the guard who'd seen / The stone move in a diamond-blaze of air / Or the gates of horn behind the gates of clay."
Lord Dunsany His poem "The Gate of Horn" appears in his 1940 book "War Poems". It is about his leaving his native Ireland and its false dream of neutrality in WW2, to volunteer in Kent to fight the Germans if they invade, and the hope of a true dream of victory.
The Ivory Gate, a novel by Walter Besant, describing a Solicitor with a split personality. The utopian thoughts of his alter ego are said to occur "before the Ivory Gate".

Back To Top
Copyright TSDF